The Friends of Burntisland Heritage Trust are a volunteer group formed in 1999.

The aim of the trust is to protect and conserve Burntisland's rich heritage.

The annual heritage exhibition and historic walks are the Trust’s core activites. The exhibitions have been held every year with many varied and changing themes since 1994. The free summer exhibitions have attracted many thousands of visitors from Burntisland itself, from other parts of the UK, and from many other countries.

In 1998 the Trust set up the Charles wRex Project to search for the wreck of the 'Blessing', King Charles I's baggage ferry which sank off Burntisland in 1633. Much work has been done, including a recent sub-bottom survey in 2013 which validated the presence of remains buried deep in the seabed. Efforts to identify the remains are ongoing.

The Trust deals with a large number of enquiries on all aspects of Burntisland's heritage. Most of these come from visitors to the annual exhibition, although there is a steady stream all the year round. A large number are now received by e mail. Trust volunteers do their best to answer all these enquiries.

In 2005, the Trust set up its oral history project, to record for posterity the memories of the older folk in the town. The first phase was completed in 2005, and resulted in the publication of a book based on recorded memories. The project re-commenced in 2006, and further interviews are currently being carried out.

The Trust was the lead organisation in the Kirkton Church and Graveyard restoration project, which began in 2014 and was completed in 2018.

The Trust maintains a comprehensive database and indexing project with details of all its heritage information relating to Burntisland and its people.

The Trust has a significant educational role. It has close links with Burntisland Primary School, which has benefited from the Trust's donations of various educational materials and from talks by the Trust's Convener. School parties are shown round the Trust's exhibitions. The Convener also gives frequent talks to a variety of other groups. The Trust has been closely involved in educational projects run by the local Development Trust and Rotary Club. The Trust also has close links with the Museum of Communication, Burntisland.

The Trust has produced and published a number of books and DVDs. 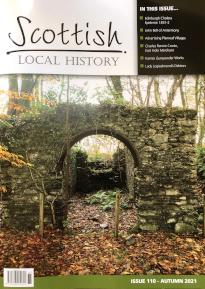